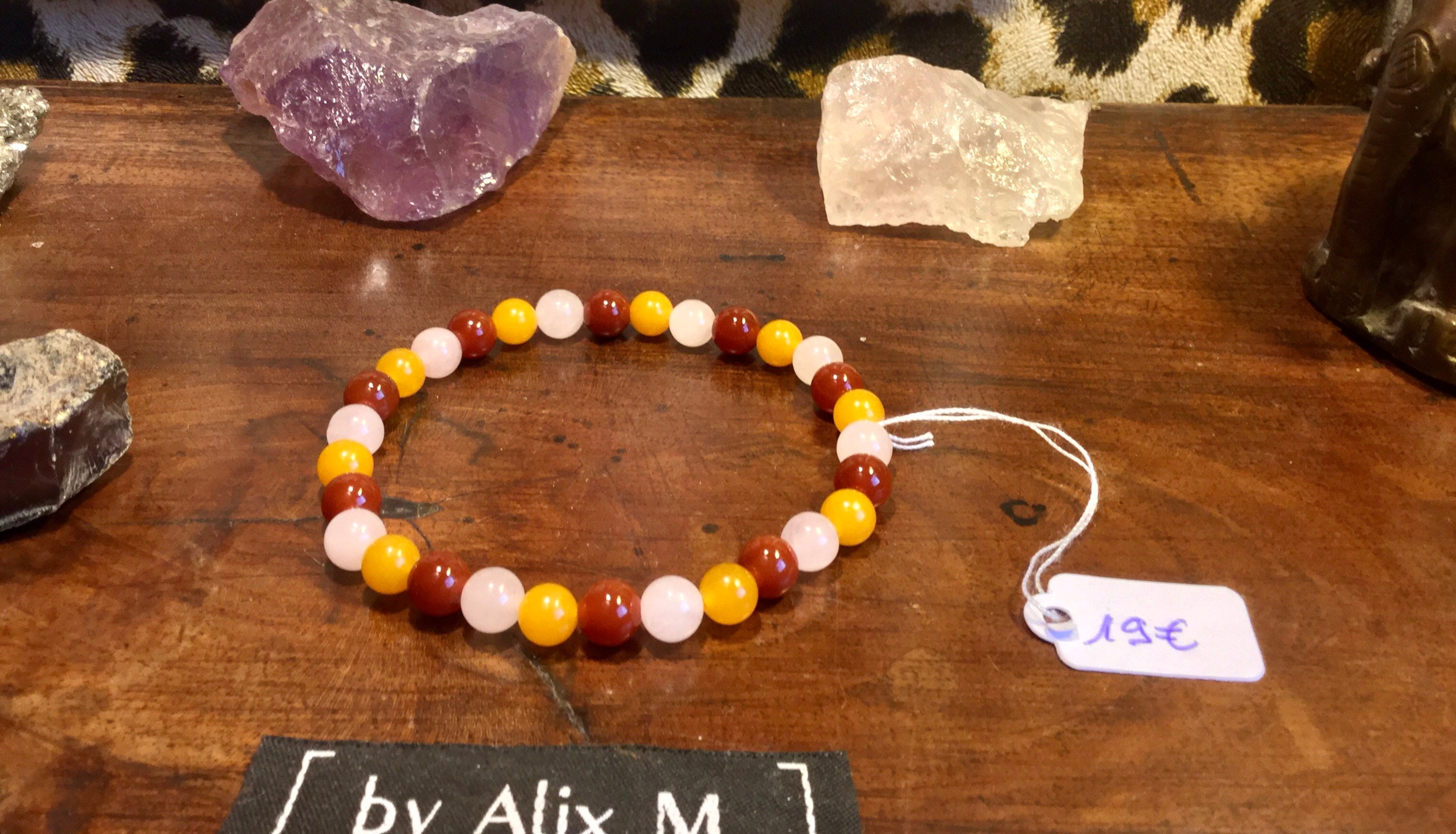 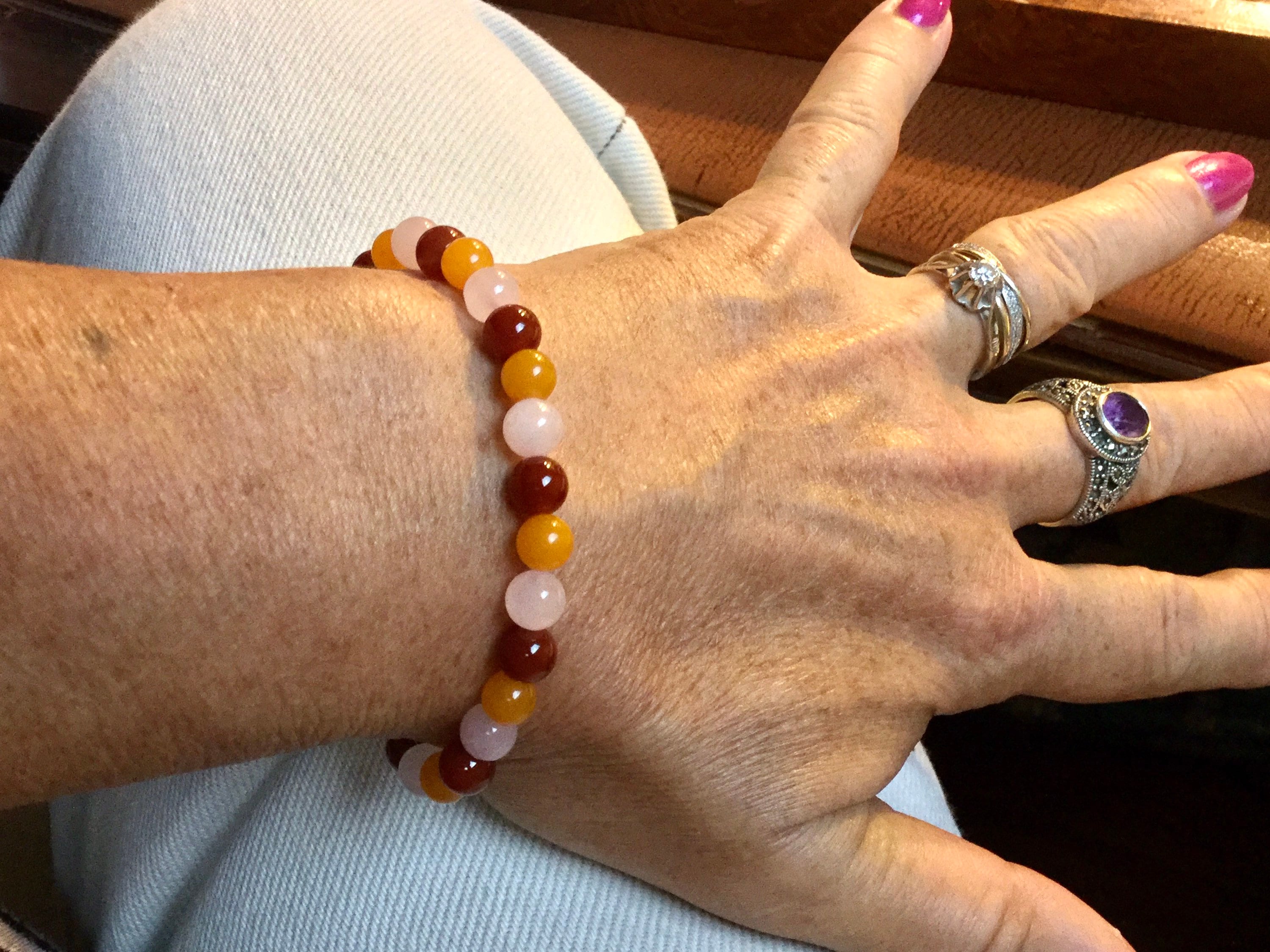 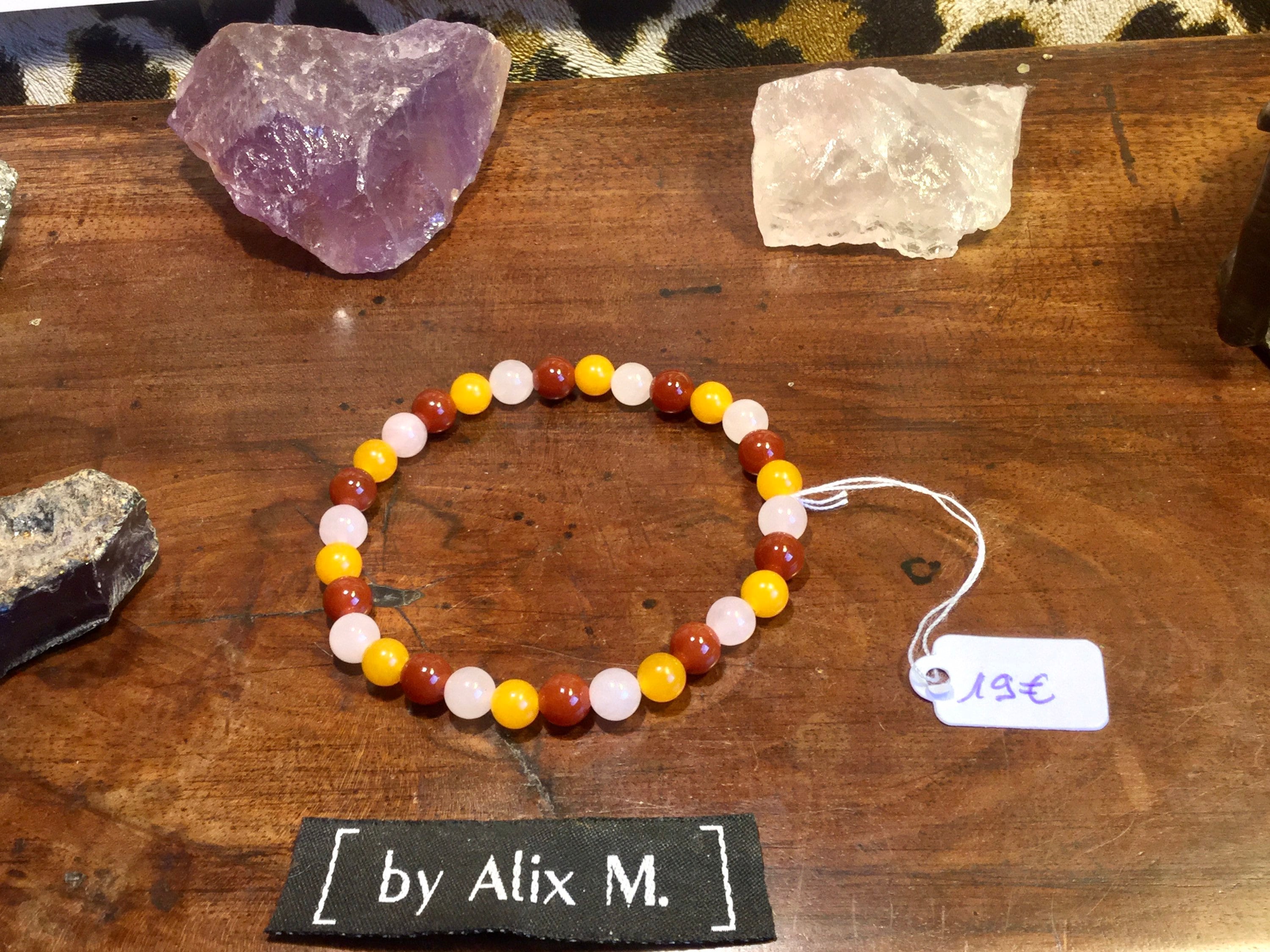 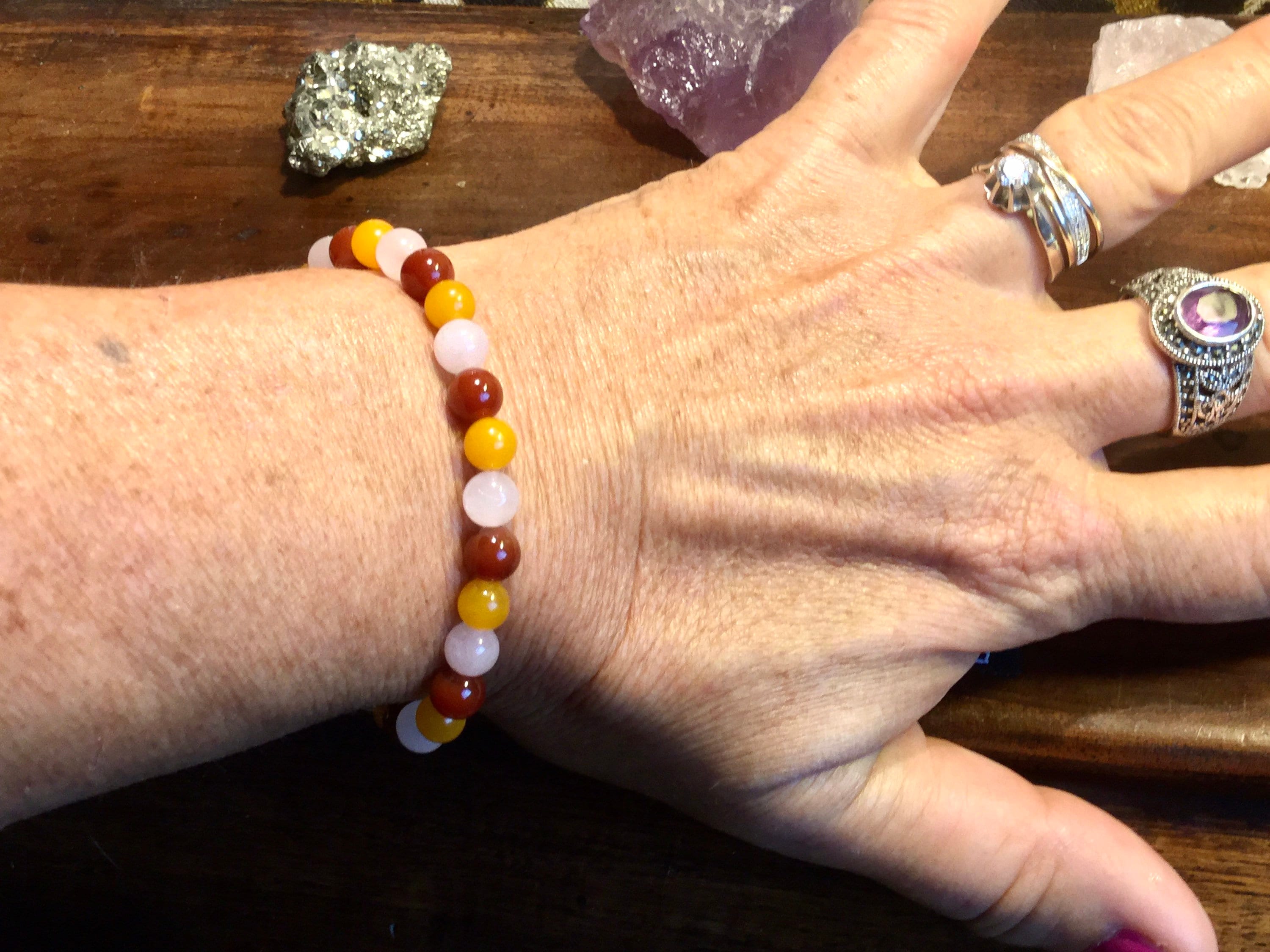 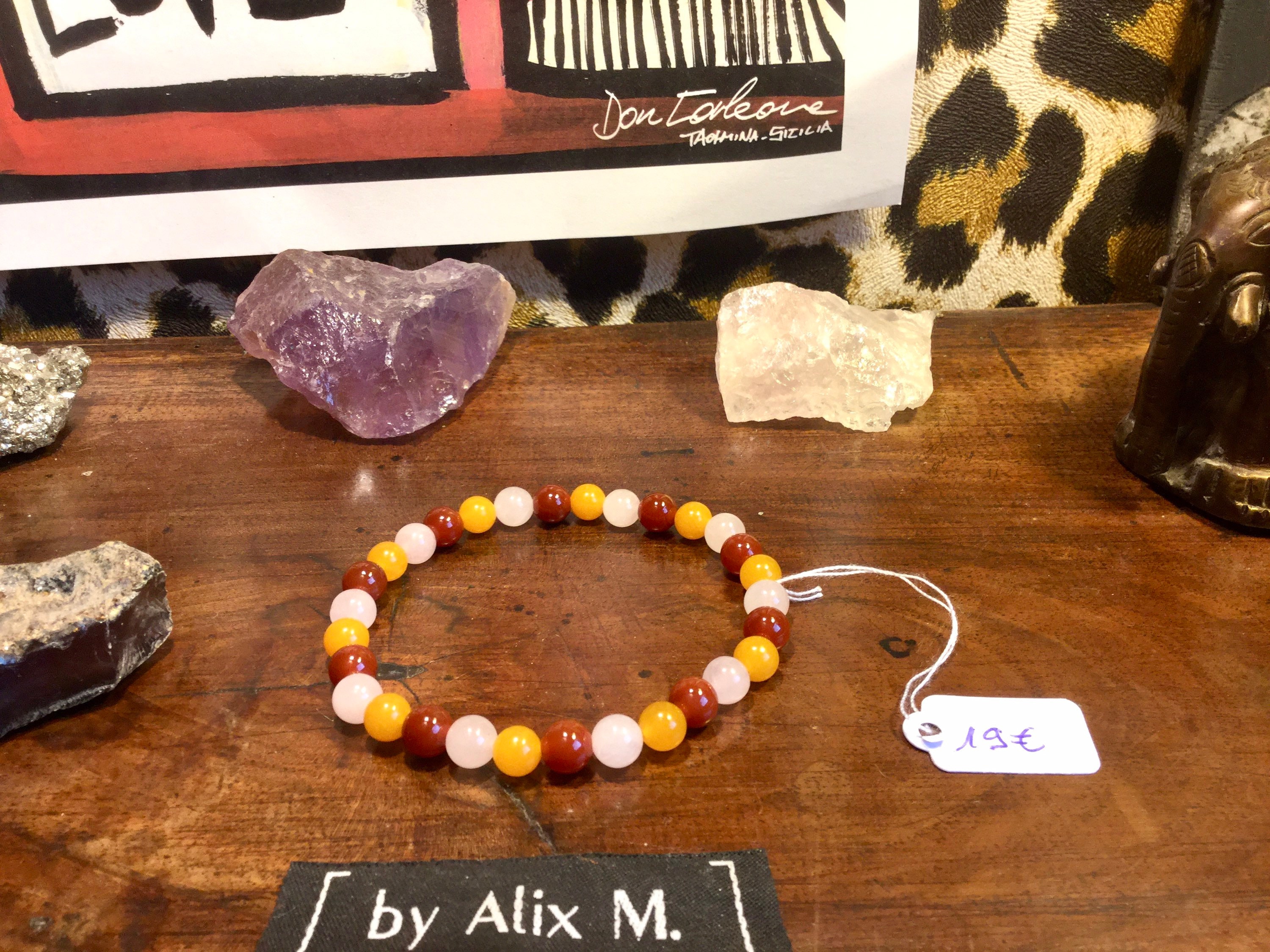 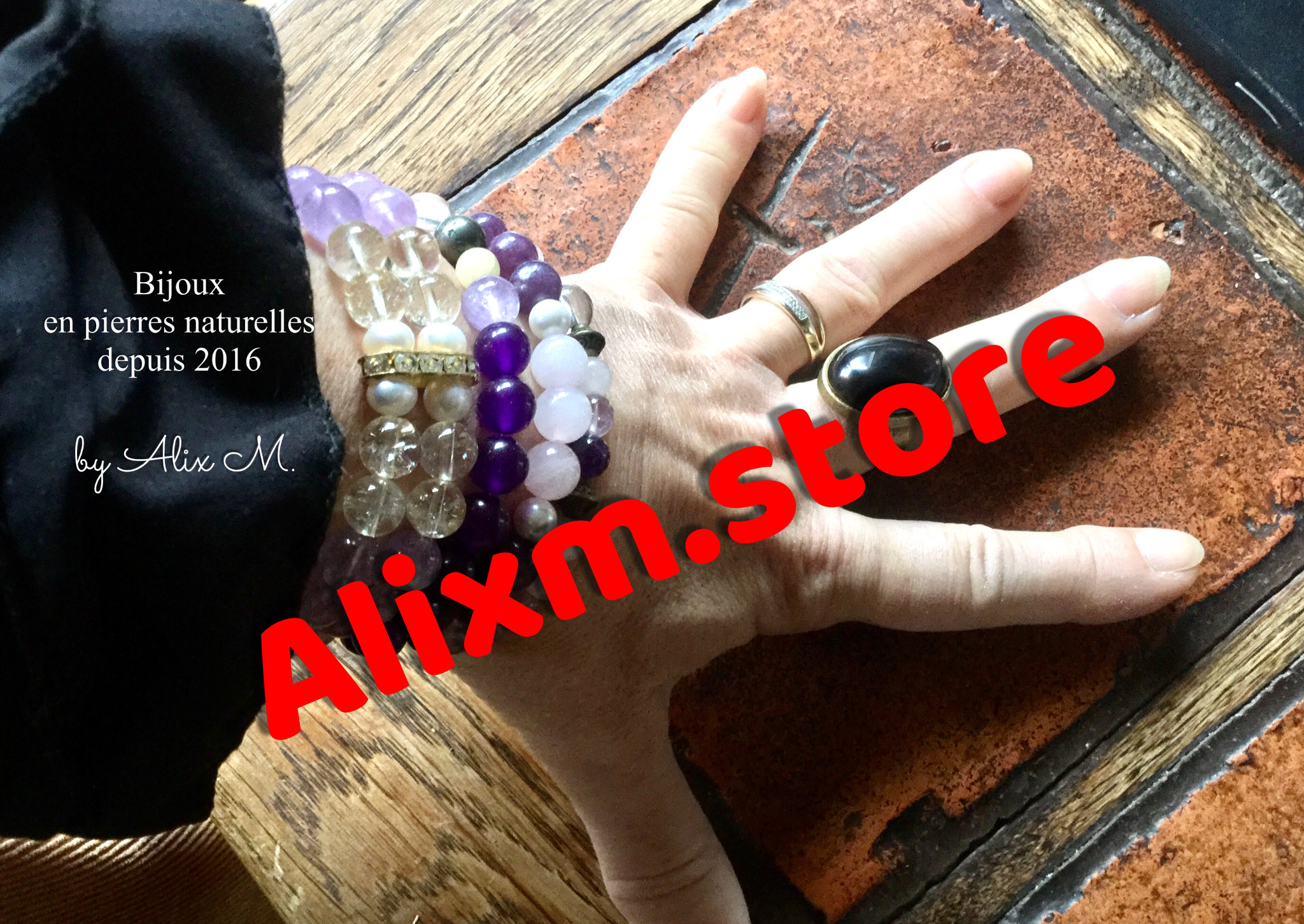 I made this Bracelet in natural stones of orange Aventurine, red Agate and Rose Quartz for, among other things, Luck, Optimism and appeasement that it will transmit to the one who wears it!

It is 18 cm. I can adapt it to your wrist for free. Do not hesitate to contact me!

Delivery in tracked envelope. Preparation and sending of the order, 1 working day.

My creations in natural stone jewelry are a way for me to transmit my passion for these beautiful minerals with amazing virtues!

My advice to purify and recharge the stones of this bracelet. On full moon evenings, put it in cold water for at least 20 minutes and then wipe it off and expose it on a windowsill throughout the night.

Aventurine is one of the quartzites.

Its main deposits are located in Brazil, India and Russia.

In lithhotherapie, Aventurine has an energy of a soft and easily accessible nature, which makes this natural mineral, the ideal stone to begin a process of self-knowledge.
When combined with rose quartz, it allows the opening of the heart and consciousness.
Combined with a smoky quartz, it helps to start on a new basis with optimism.

The green aventurine / citrine pair proves to be a powerful combination to attract luck and abundance.

The energy it releases harmonizes the different chakras and provides its user with a healthy vision of life!

It makes it possible to have clear ideas so to make decisions more easily in the face of complicated situations.

It also allows you to regain your free will, your freedom to think and act, and therefore well-being and self-confidence.

Aventurine also increases the creative mind and determination of its holder.

It contributes to greater autonomy and promotes access to new ideas and concepts (ideal faculties for creation).

It also has an anti-stress effect, which contributes to inner tranquility and the preservation of one's composure. It is therefore ideal for those looking to soothe their stress and calm their nervousness. Indeed, green aventurine makes patient and calms anger, strengthening self-control. These qualities are essential, to carry out one's projects, but also in self-realization.

Like turquoise and Tourmaline, aventurine would have the reputation of being a soft and beneficial stone that absorbs negative waves and harmful emanations of all kinds: electric and electromagnetic waves, for example emitted by high-voltage lines, telluric waves from underground streams and Hartman networks, these strange currents that would crisscross the surface of the globe.
In this, it would be protective of the habitat and can be placed at the four corners of the houses to clean up the atmosphere.

Aventurine solves emotional problems. This stone restores humor and cheerfulness. It brings compassion and makes it favorable to feel one's love and that of others.
It provides patience and increases the capacity for tolerance necessary to promote acceptance of oneself, but also of others.

Aventurine also proves to be very useful for calming children who are overly excited. It helps them to flourish, by promoting their openness to others and to the world. It develops their sense of adventure. In combination with rose quartz, it is useful for the treatment of speech disorders in children.

Aventurine is considered a stone of luck and optimism.

Green aventurine is the perfect stone to treat problems related to the skin, liver, eyes and also the heart. On the skin, it helps to remove impurities and beautify it.

In the form of an elixir, it is all the more effective on skin disorders. However, it should be applied topically in the form of a compress on the affected parts (on the accupuncture points for example) and also drink it (in water).

It helps in the healing process, thanks to its high silicon content, excellent for the skin.

At the level of the heart, aventurine prevents the risk of dysfunction. Placed on the chest, it soothes people suffering from irregularity. It promotes the proper functioning of the gallbladder and helps the liver in its function of purifying the body.

In pregnant women, aventurine can soothe nausea and as well as pregnancy-related pain. It also allows infants to stimulate growth and relieve them in case of pain due to the appearance of dentition.

Aventurine brings inner tranquility thanks to its anti-stress effect. It thus helps to fight the difficulties of falling asleep and their effects on the body.

It easily relieves excess body temperature, and prevents various dysfunctions of the body of a general nature.

The astrological signs often associated with Aventurine are Cancer, Sagittarius and especially Taurus.

Agate is a stone calming anxieties, it soothes and harmonizes yin and yang.
It helps each being to gain self-confidence and accept himself as he is.
It brings courage in difficult times and brings courage to the wearer.
In lithotherapy, agate offers virtues of self-psychoanalyssis and extra-sensory perceptions of hidden elements. It is not uncommon to see people wearing a pendant or an agate bracelet, all the virtues can then be exercised throughout the day.

Agate also makes it possible to bring more sincerity and encourages to say the substance of thought.
This natural stone develops concentration and promotes memories. It is also a stone promoting clairvoyance, the recording of different lived experiences and contemplation.
Always in this perspective of calm and fullness, the agate stone allows to remove the inner anger. Its role is to dispel all internally disturbing elements and emotional shocks to establish a sense of security.
Just like on the psychological level, agate in lithotherapy makes it possible to soothe and in particular the places, by harmonizing the overall energy. The simple fact of positioning an agate in your home or workplace will bring you its two main virtues: calm and luck. If you position your agate in someone who is sick, the agate stone will restore morale and courage.

Rose Quartz belongs to silicates.
Its main deposits are located in Brazil and all over the world.

It is able to soften quite hard hearts and influences the pleasures and joys of love. Heart pain fades and flies away thanks to rose quartz.

Rose quartz is also a stone that brings peace, love and friendship. It helps those who wear it to forgive but also to respect, both themselves and others.
It accompanies depressed people and promotes speed in healing, whether physical or moral.

Rose quartz in lithotherapy relieves burns but would stimulate the circulatory system and kidneys at the optimal level.

Known for its virtue of appeasement, rose quartz stone can be placed in a living room such as the living room but also in a bedroom. Love and calm will be reunited and tensions if there are any should ease and subside. If rose quartz is accompanied by a black tourmaline and is arranged in a room for example, the virtues will be increased tenfold and complementary since calm and quality of sleep will be brought. Nightmares should go away.

The astrological signs often associated with Rose Quartz are Taurus and Cancer.