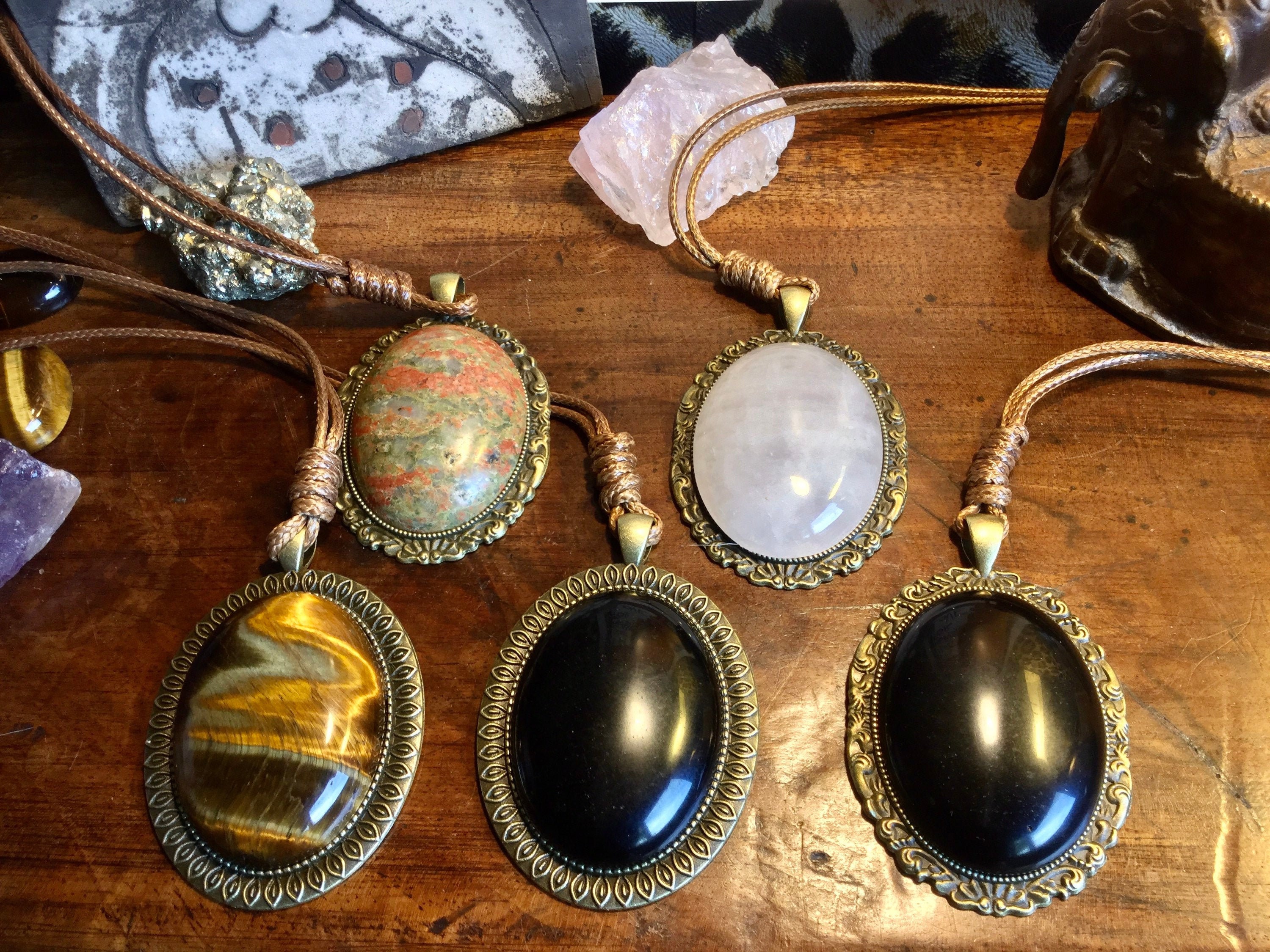 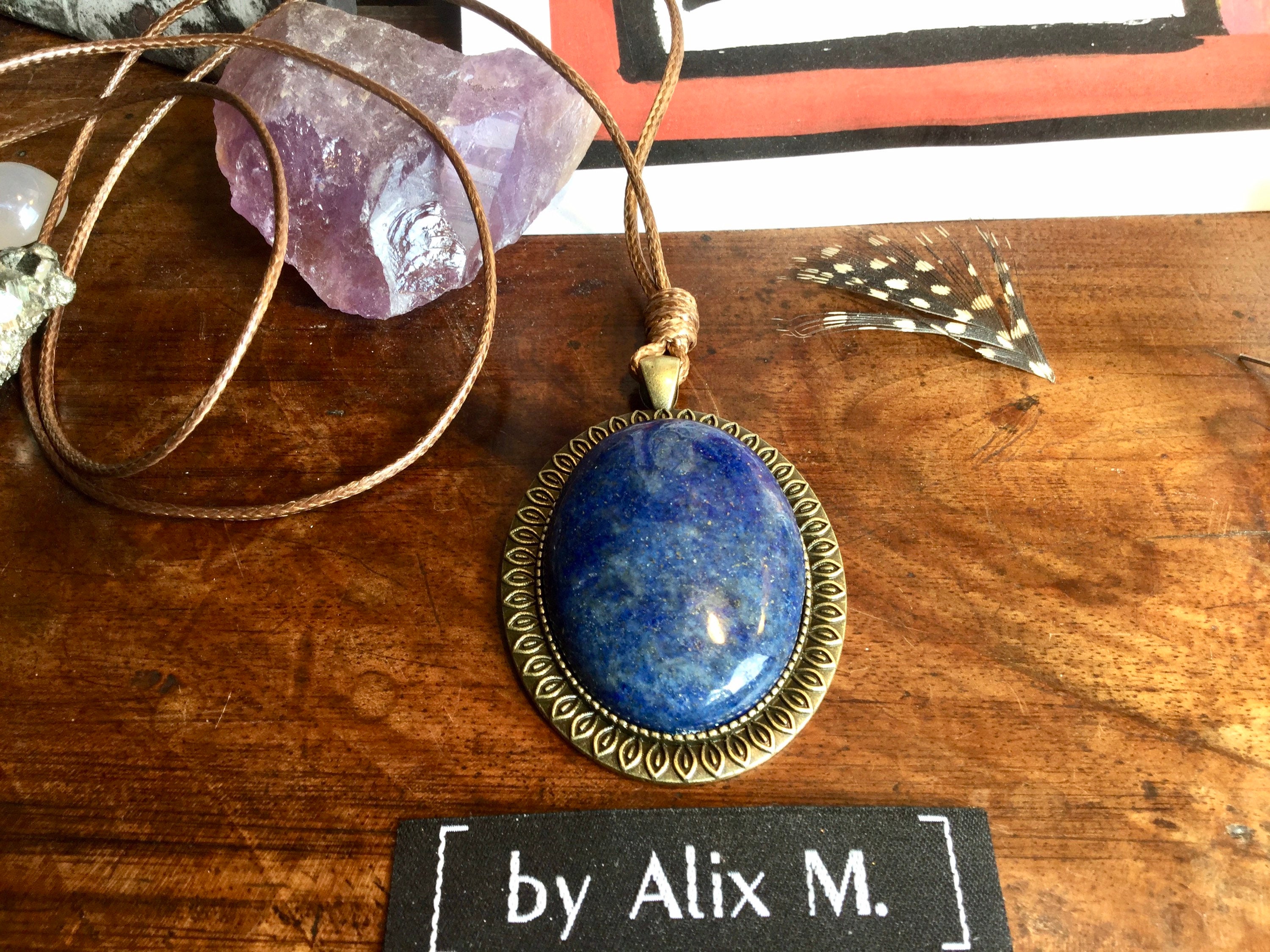 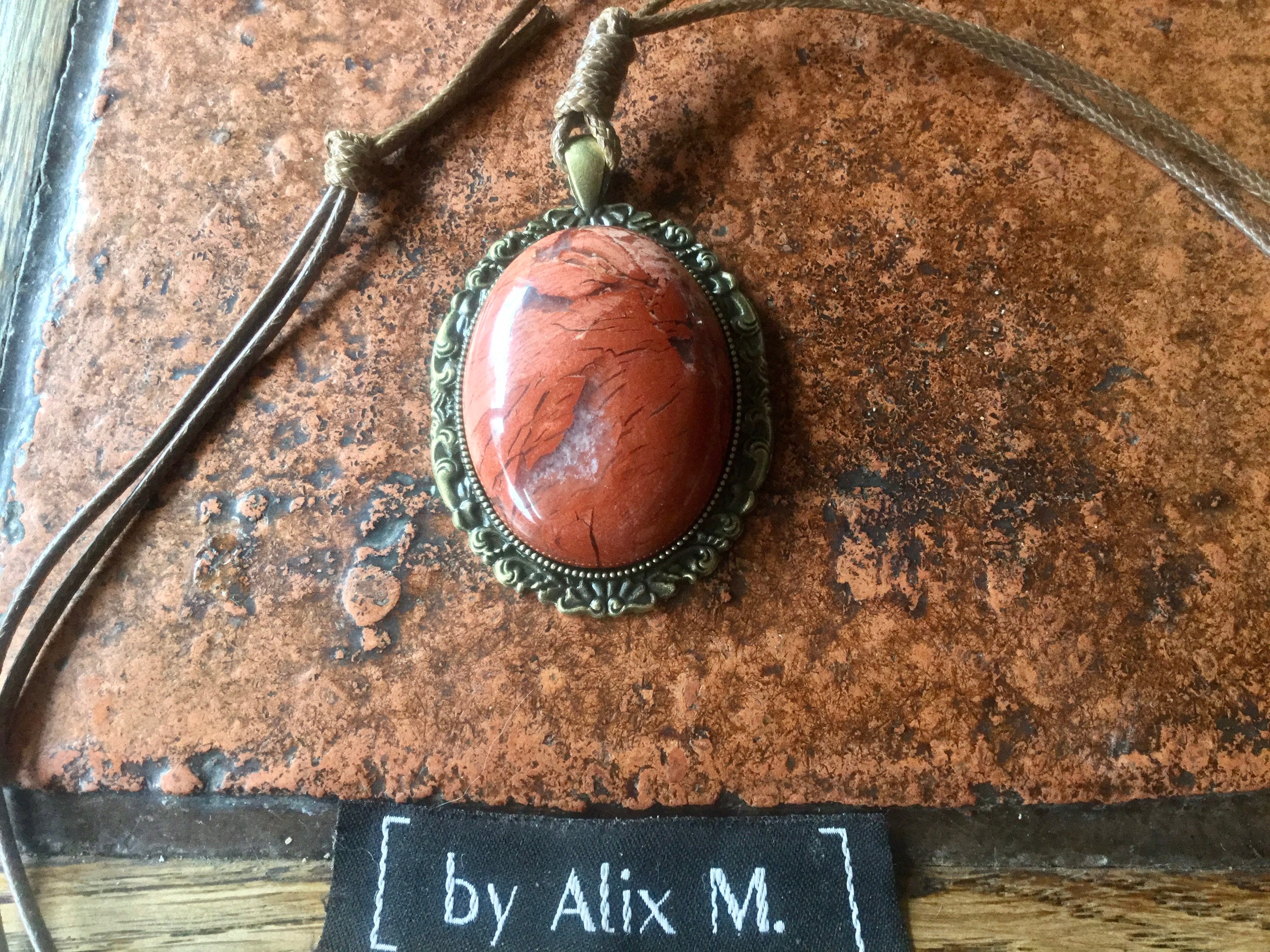 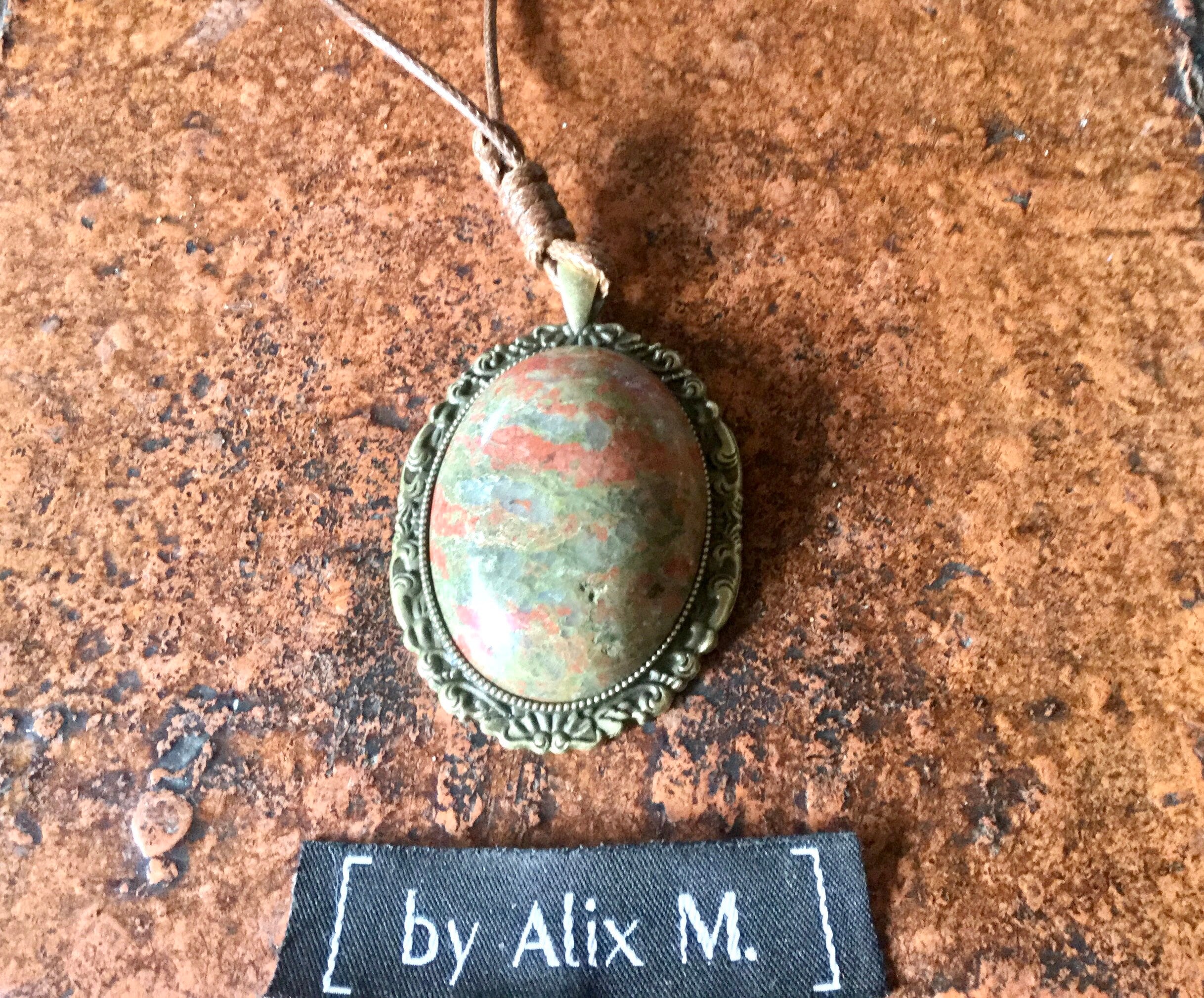 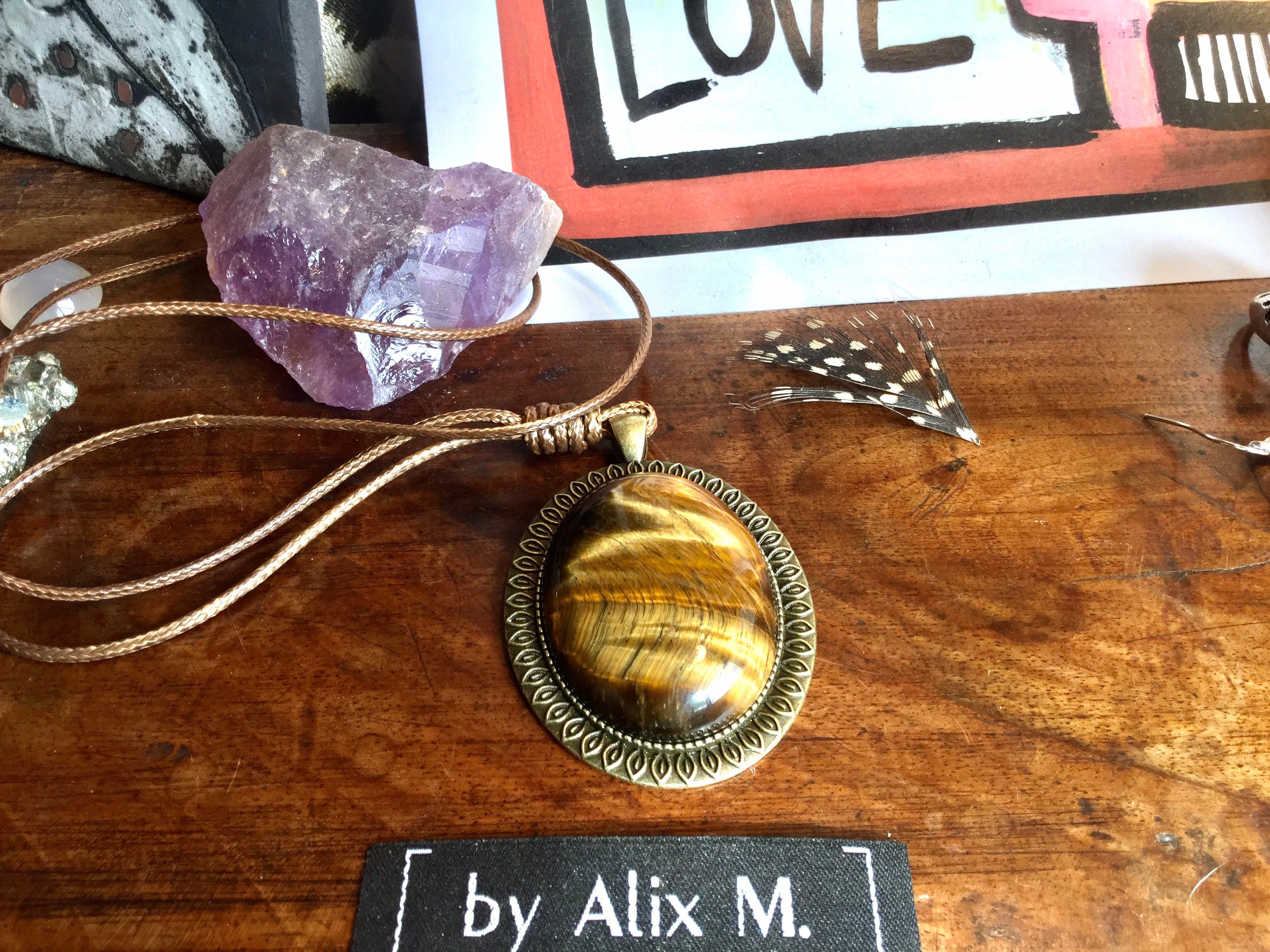 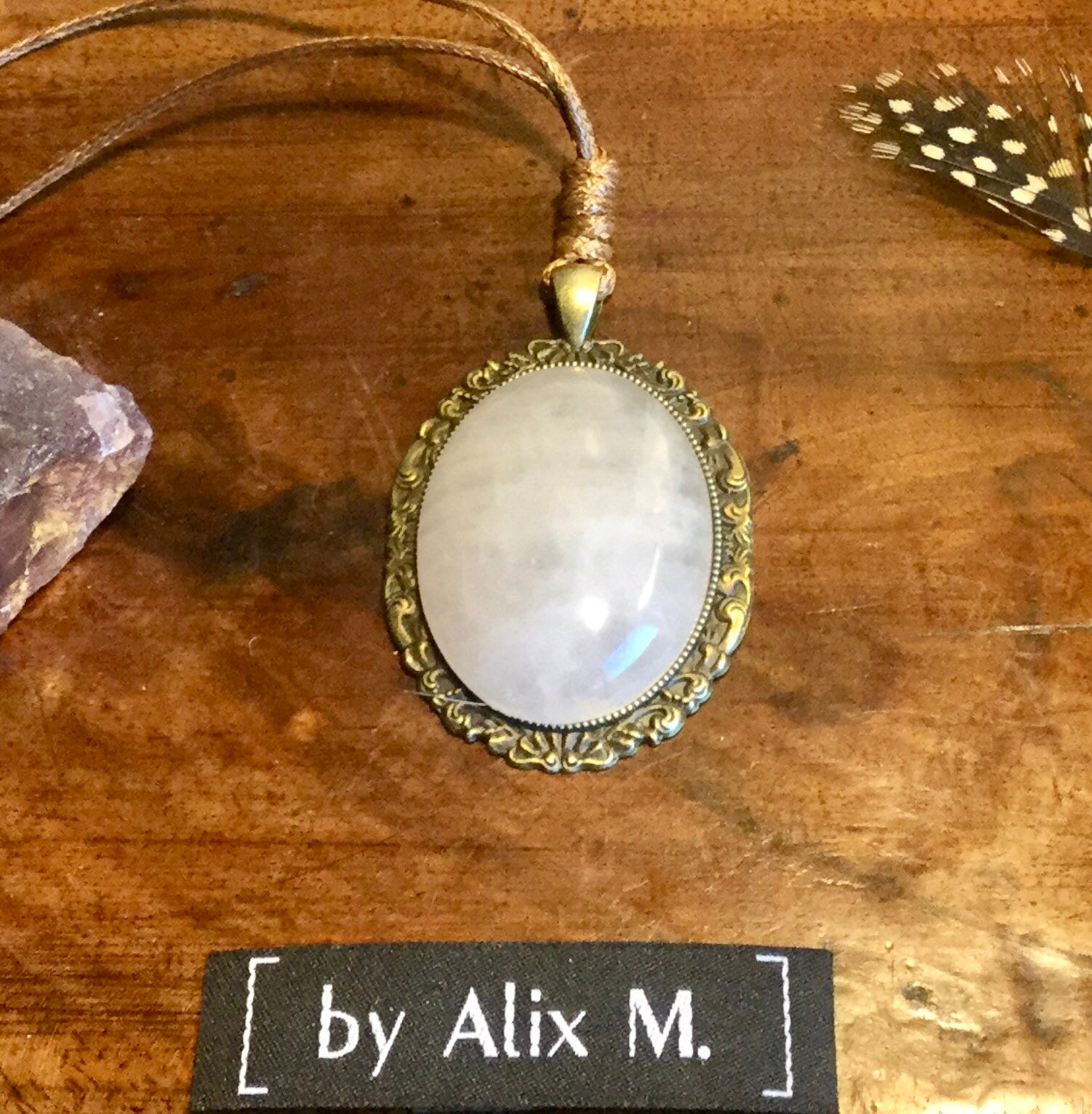 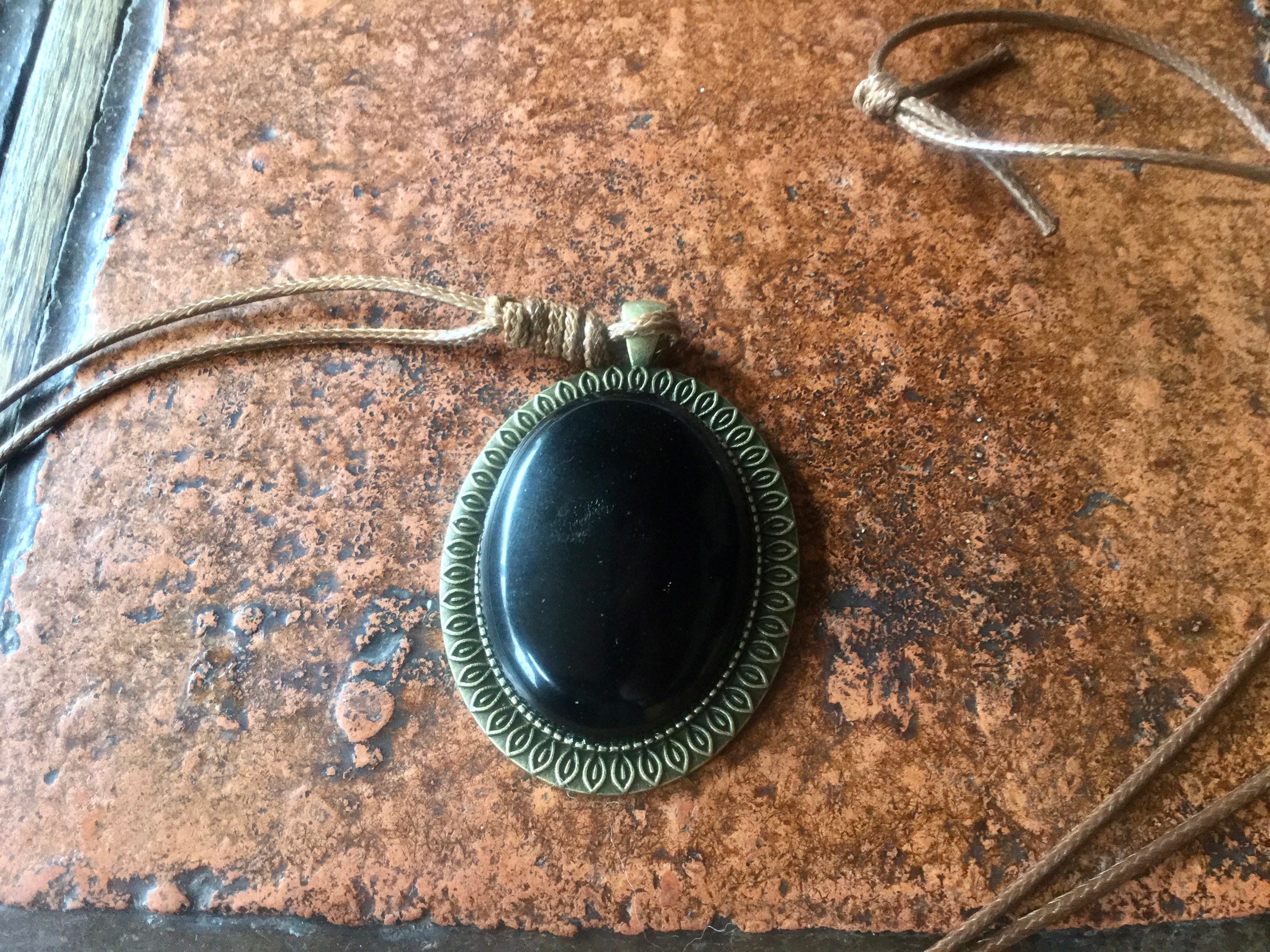 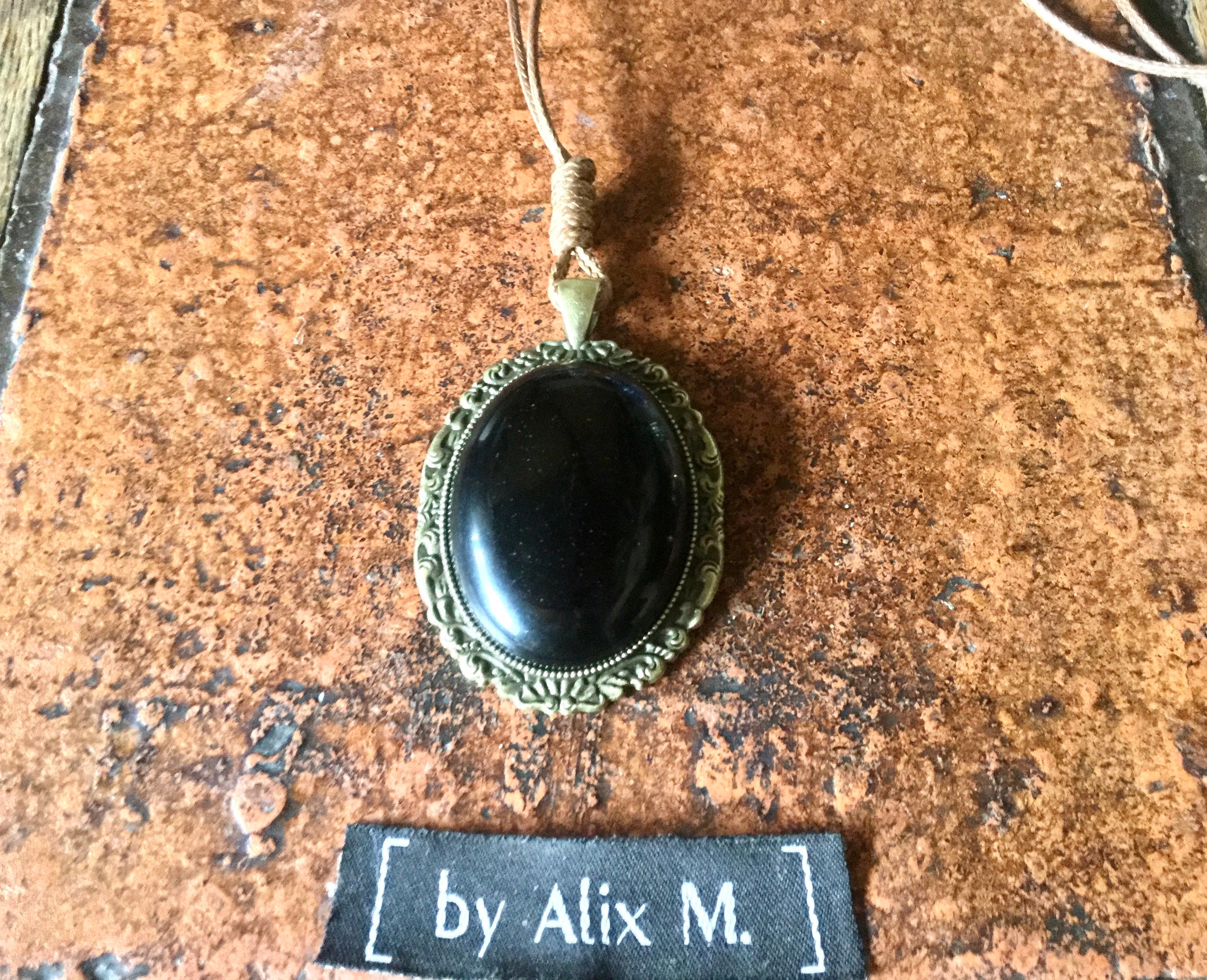 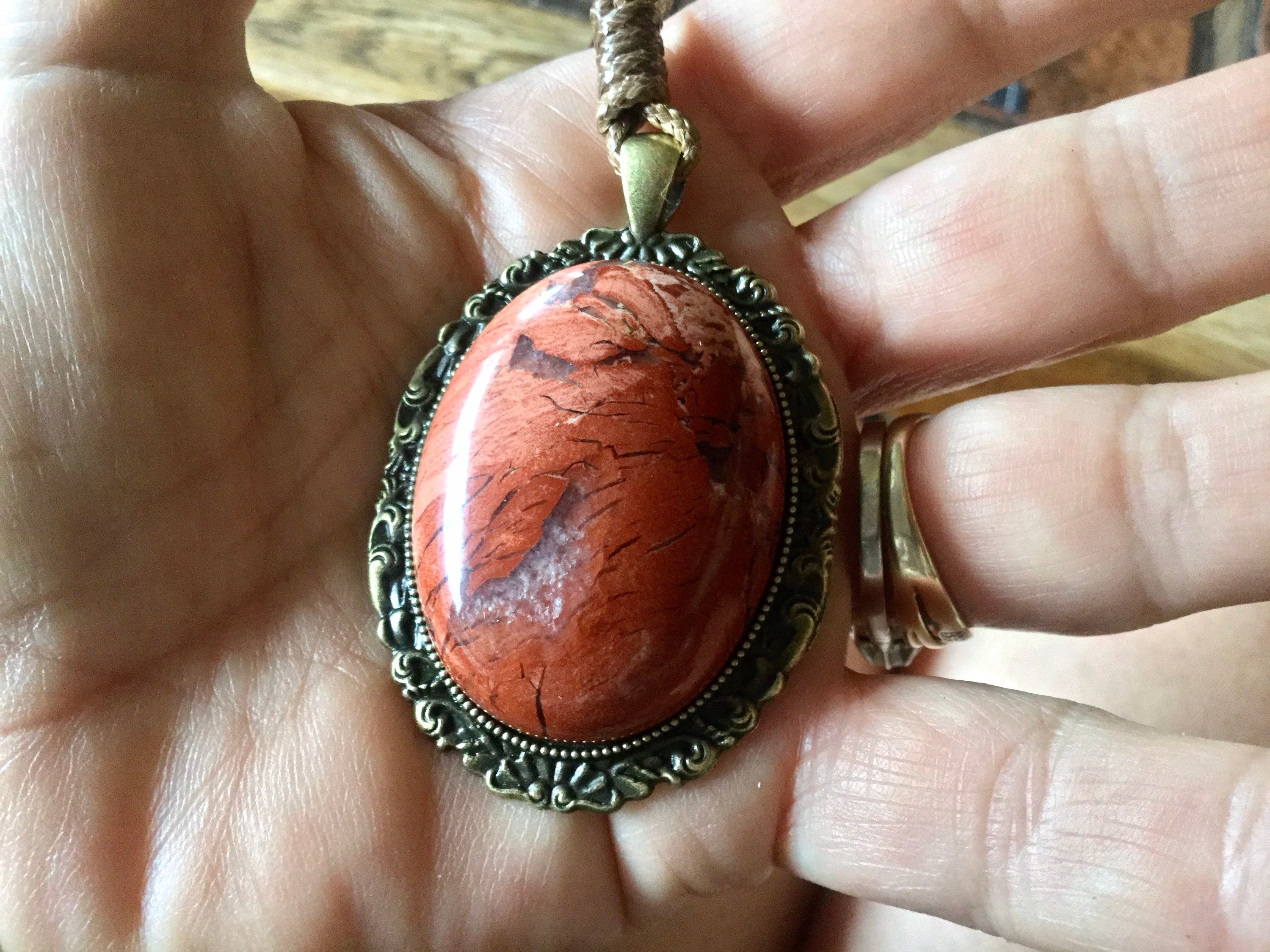 Pendant with large cabochon in 30x40 mm in Obsidian (2 supports) or Lapis-lazuli or Jaspe Bréchique or Unakite or Tiger Eye or Quartz Rose or Agate Vein Rose.
Look in your cart to check your choice.

The 90 cm cord allows you to adjust the pendant to the desired length.

The support is made of zinc alloy, without nickel.

My creations in natural fine stone jewelry are a way for me to pass on to you my passion for these beautiful minerals with amazing virtues!

My advice for purifying and recharging the stones. On full moon evenings, put them in cold water for at least 20 minutes and then wipe and expose them on a window sill overnight.

Jaspe is part of the microcristalline Quartzs.

Its main deposits are in Germany, Brazil, the United States, France, India, Madagascar, the Urals, Russia.

In lithotherapy, jasper is known for its powerful powers.

He would be endowed with magical powers and for them to act, one would have to constantly carry the jasper on oneself in order to balance the pains, develop one's own esteem and develop internally, position oneself and take its place with others, if only through communication.

Its main deposits are in Austria, the United States, Mexico, Mozambique and Norway.

Unakite is best known by lithotherapy as a building of the body' regeneration and strengthening.

The stone appears to have a positive effect on the immune system, bones and teeth that it would strengthen and revitalize.

Favorable to the elimination of fats and toxins from the body, unakite would be recommended in case of diet or diet.

It would also help women during ovulation periods and promote tissue and cell renewal.

On the mental level in lithotherapy, the unakite allows the wearer to find himself or herself.

With the Unakite, the blockages linked to the past and being buried in the unconscious are gradually eliminated.

The unakite also allows you to learn to put situations into perspective but also to take a step back.

The unakite is not in favour of a particular astrological sign, it would rather be beneficial to all signs.

Tiger Eye is from the Quartzite family.

In Lithotherapy, the Tiger Eye is a protective stone!

It returns the negative energy to the one who emitted it. This stone protects against all evil claims, from black magic or even spells.

It promotes perseverance in order to achieve the goals we have set for ourselves. It allows you to draw on your own resources to demonstrate what you intend to do. The tiger eye is also mirrored in giving awareness of its defects to the wearer.

It also removes the ill-being, or even alleviates depression.
The tiger eye will also balance the emotional body by providing it with energy.

If you want to place a tiger eye stone in your living room or in your room for example, you will bring the prohibition of negativity in the place in question. The tiger eye will have a barrier role. Also, this stone will promote repair (either related to fractures or even organs...).

The astrological signs often associated with the Tiger Eye are Gemini, Lion and Virgo.

Quartz Rose belongs to silicates.
Its main deposits are in Brazil and all over the world.

It is able to soften the hearts hard enough and influences the pleasures and joys of love. The pain of the heart fades and flies away thanks to the pink quartz.

Pink quartz is also a stone of peace, love and friendship. It helps those who carry it to forgive but also to respect, both themselves and others.
It accompanies people with depression and promotes speed in healing, whether physical or moral.

Pink quartz in lithotherapy helps relieve burns but stimulates the circulatory system as well as the kidneys at optimal level.

Known for its virtue of appeasement, the pink quartz stone can be placed in a living room such as the living room but also in a bedroom. Love and calm will be reunited and tensions if any should subside and subside. If the pink quartz is accompanied by a black tourmaline and is arranged in a room for example, the virtues will be multiplied and complementary since the calm and quality of sleep will be brought. Nightmares should go away.

The astrological signs often associated with Quartz Rose are Taurus and Cancer.

Lapis lazuli is from the Silicate family.

Its main deposits are in Afghanistan, the United States, Canada, Chile, Myanmar, Pakistan and Russia.

In Lithotherapy, Lapis-lazuli brings a boost of confidence for the wearer and she encourages him to take control of his life.

Lapis lazuli frees and offers a certain ease in communicating emotions and feelings. In this, it promotes creativity.

Among its properties and virtues, it can above all be given the contribution of honesty, compassion and righteousness.

Lapis lazuli stone in lithotherapy would also provide relief for migraines and headaches. Insomnia and dizziness would be alleviated. It would facilitate breathing and bring benefits to the throat and nervous system.

The astrological signs often associated with Lapis-lazuli are Sagittarius, Fish and Aquarius.

The Obsidian is a stone of volcanic origin.

The main deposits are in Armenia, the United States, Japan, Iceland, Mexico and Peru.

For my part, I had the joy of finding them on the beaches of Lipari in the wind islands.

In Lithotherapy, Obsidian is a stone that must be used with care due to its fairly powerful properties.

The obsidian is a protective stone of a very important force and that acts very quickly.

Ideal for frail people, it protects them from negative energies.
The obsidian stone psychologically in lithotherapy brings a very substantial energy which allows for the wearer to regain the inner peace and calm of the soul.
The obsidian frees the mental plane to dismiss all notions of confusion and leave the full openness to the intellectual, to serenity.
It is also well known for its openness to the celestial world. Many lights use an obsidian ball to facilitate communication with the parallel world.

Obsidian also alleviates many pains, such as cramps or other joint pain.
If you place an obsidian near your bed, it would also have the virtues of removing all mental tension.

It should be discharged regularly because it absorbs the negative, so remember to wash it with clear or salty water regularly.

The astrological signs often associated with the Obsidian are Scorpio, Sagittarius and Capricorn!