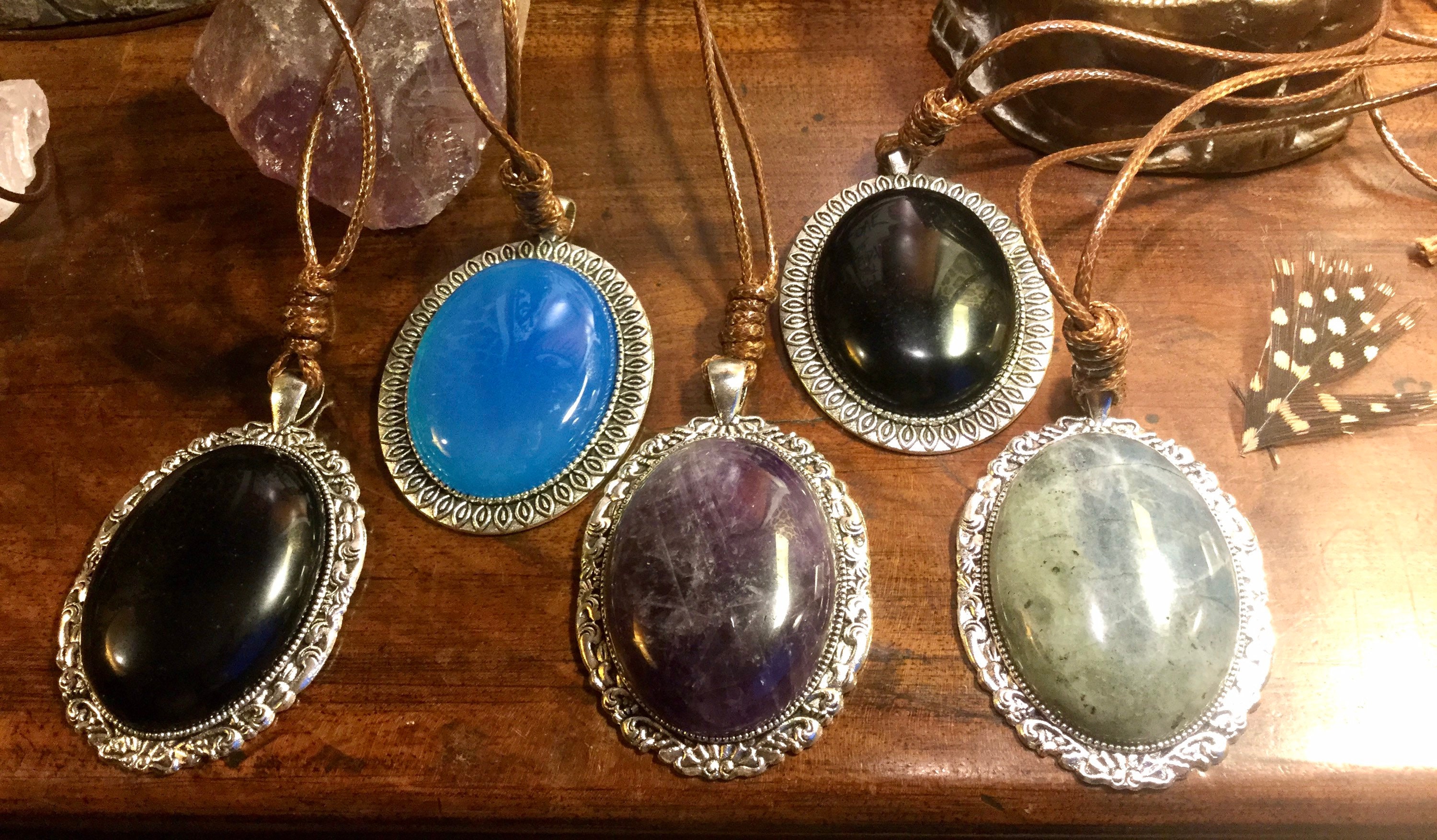 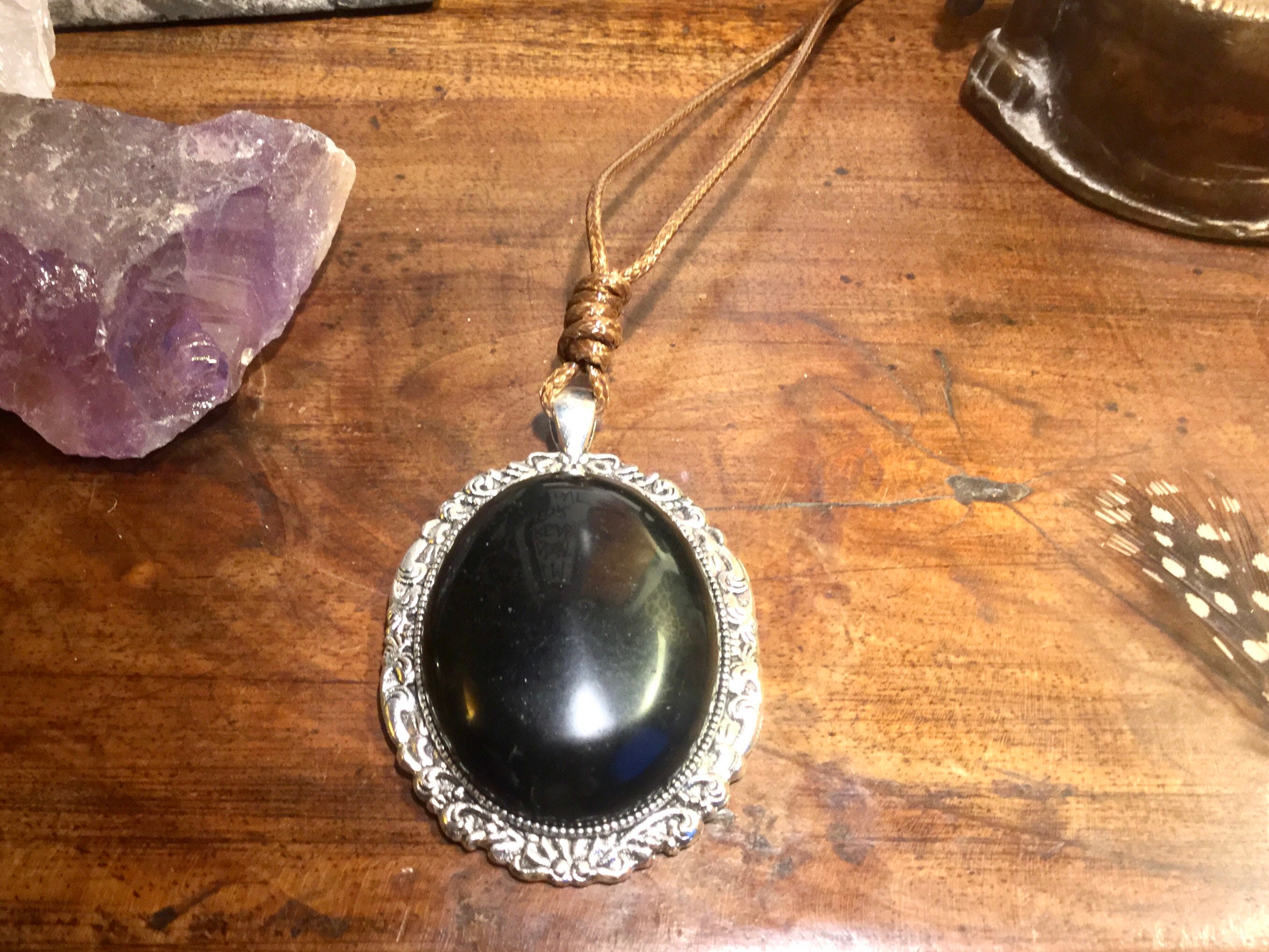 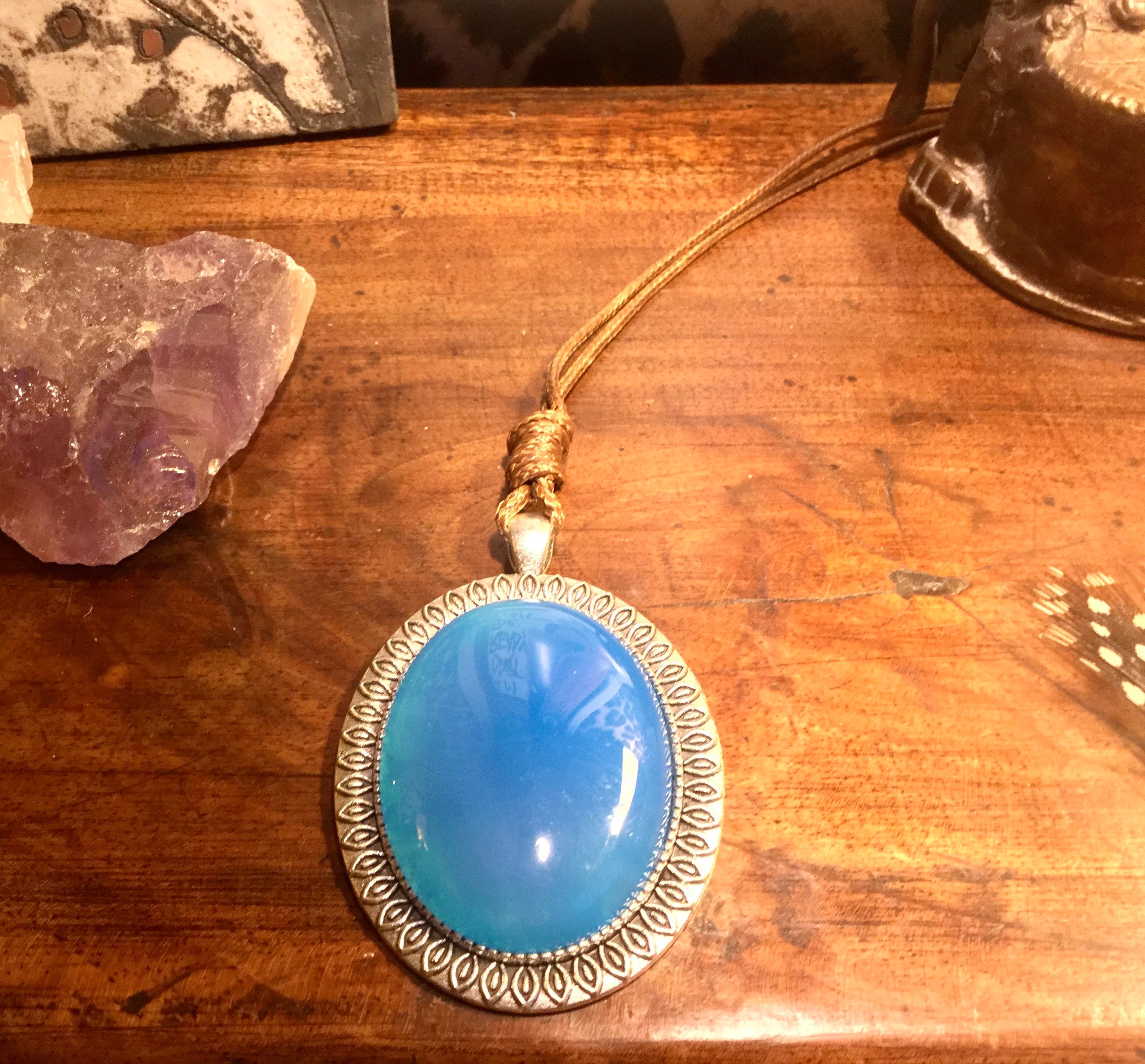 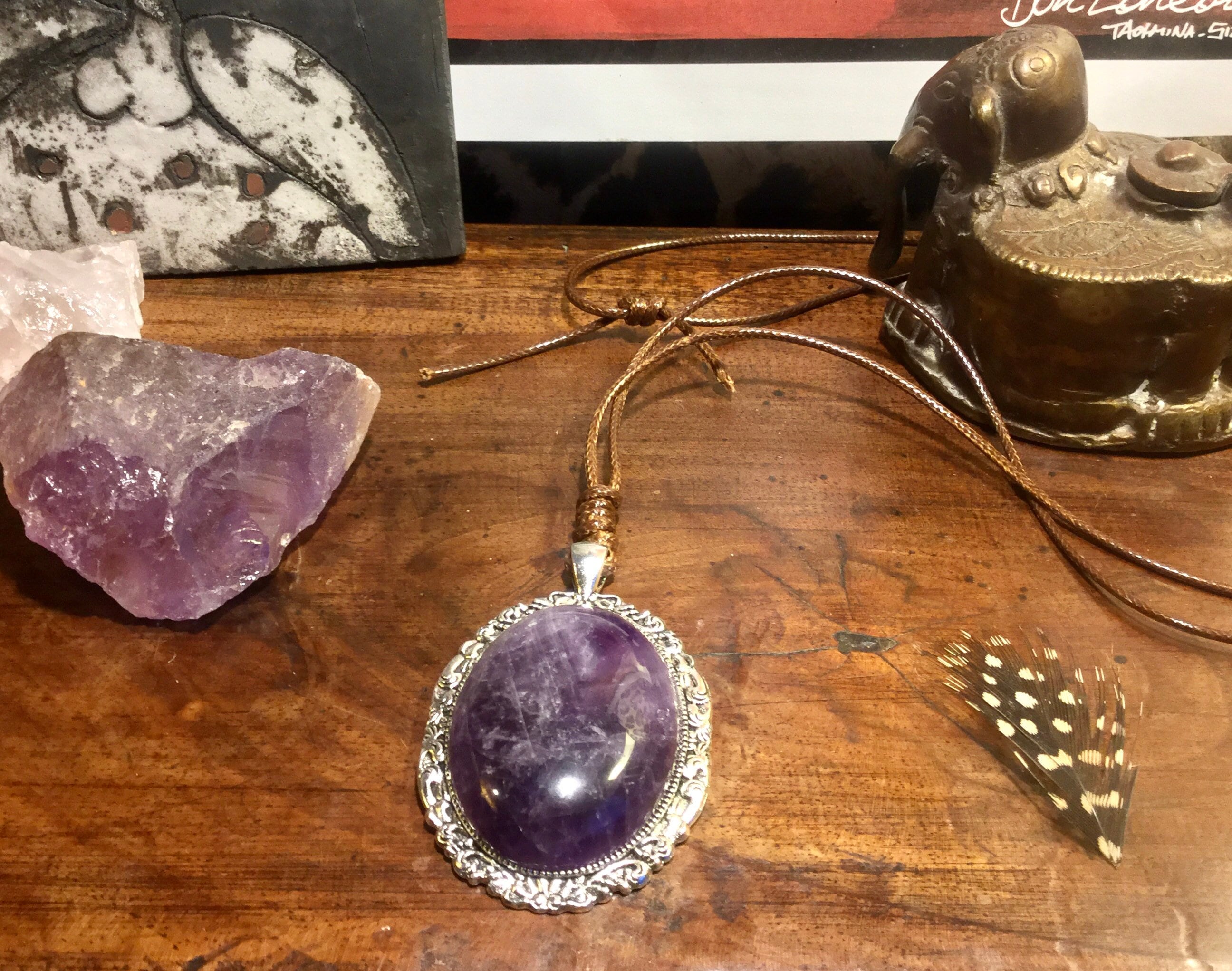 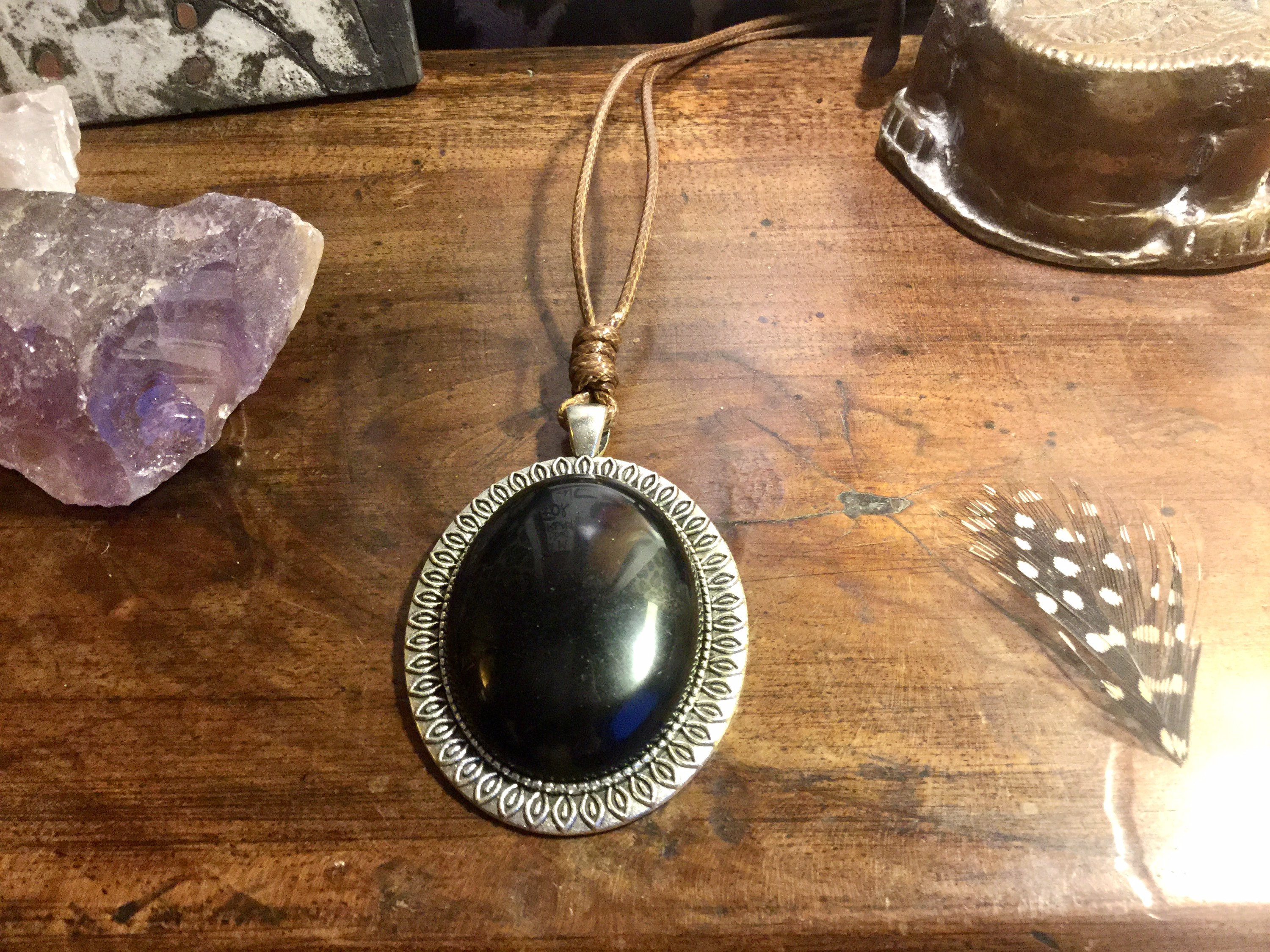 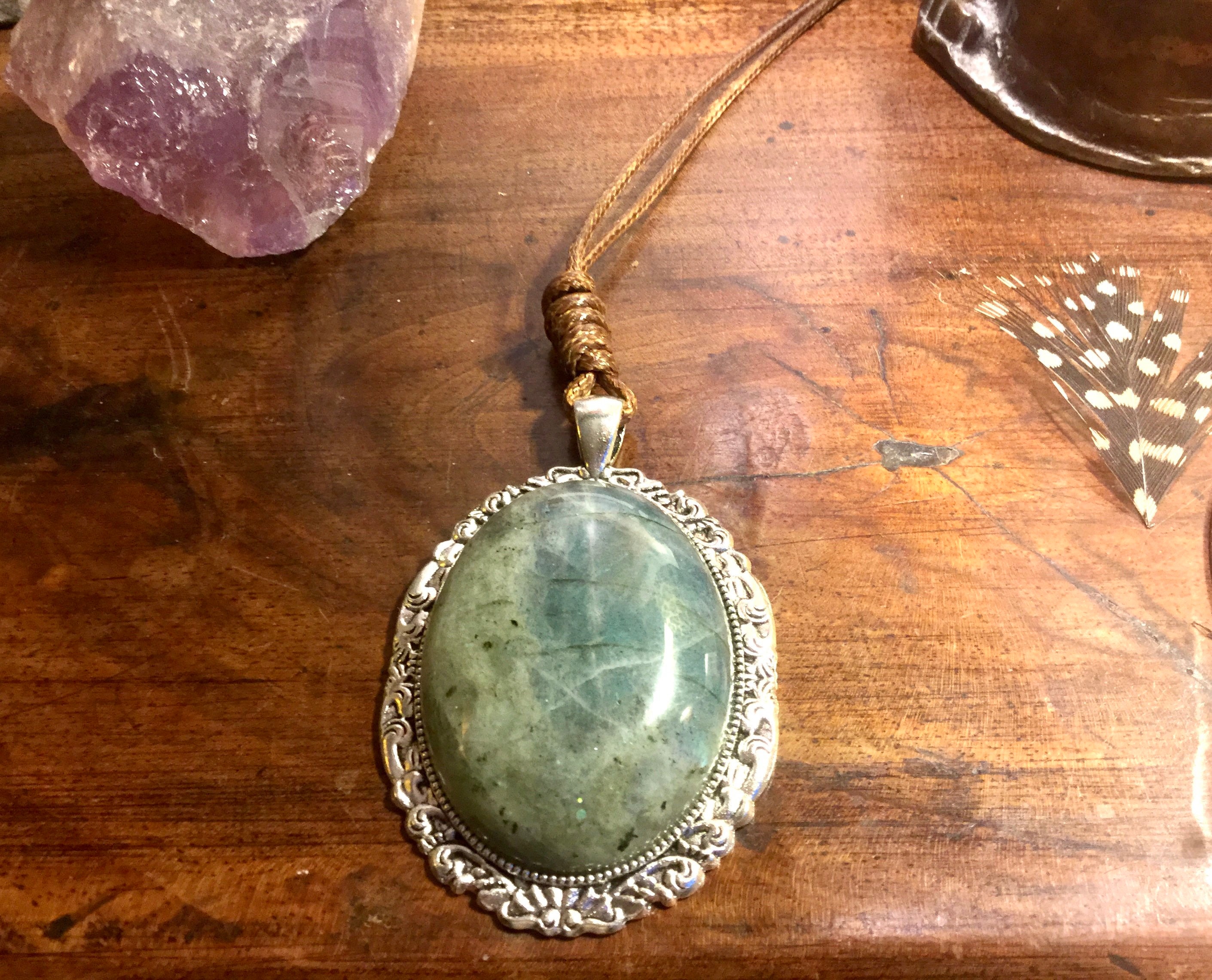 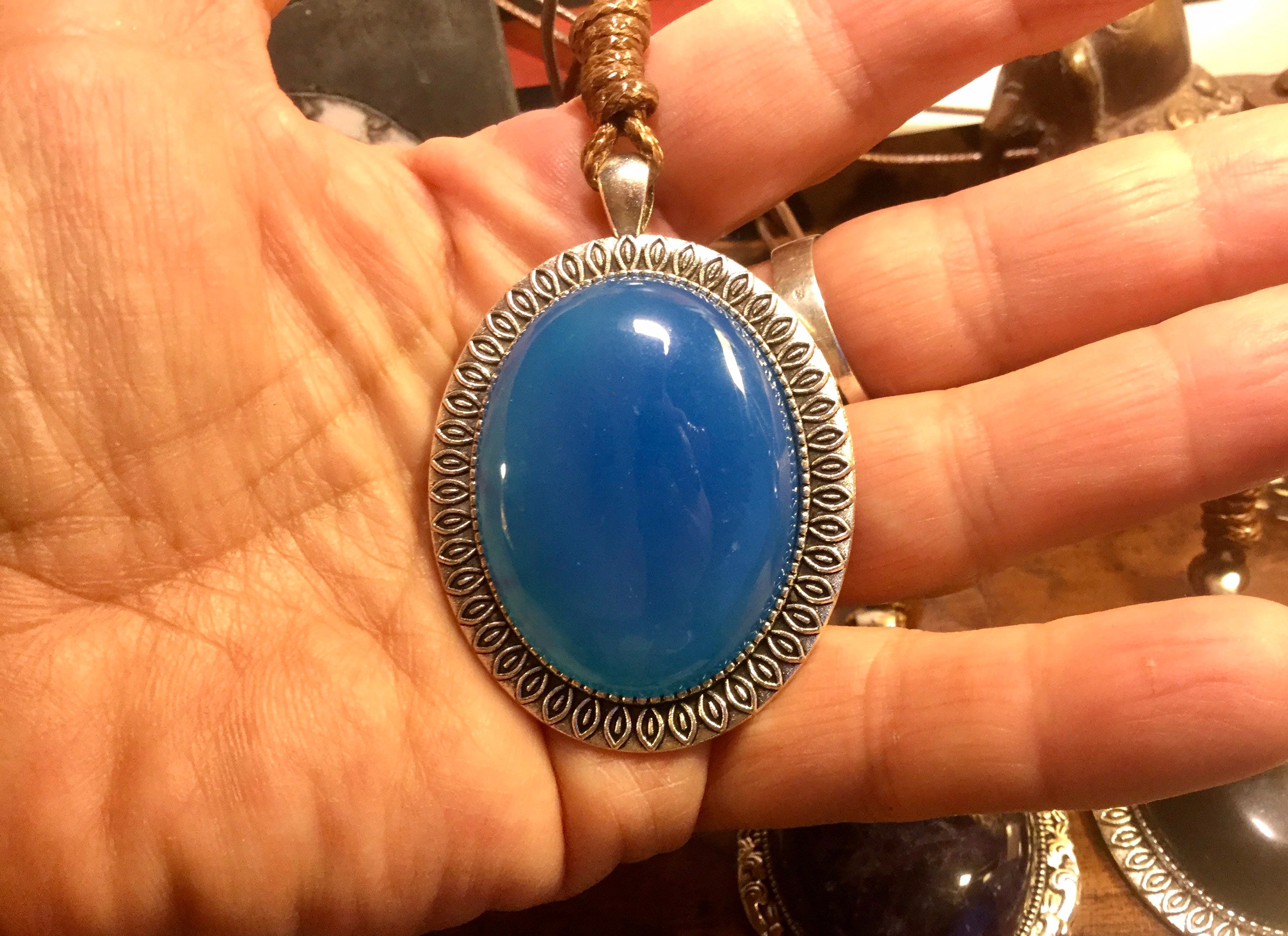 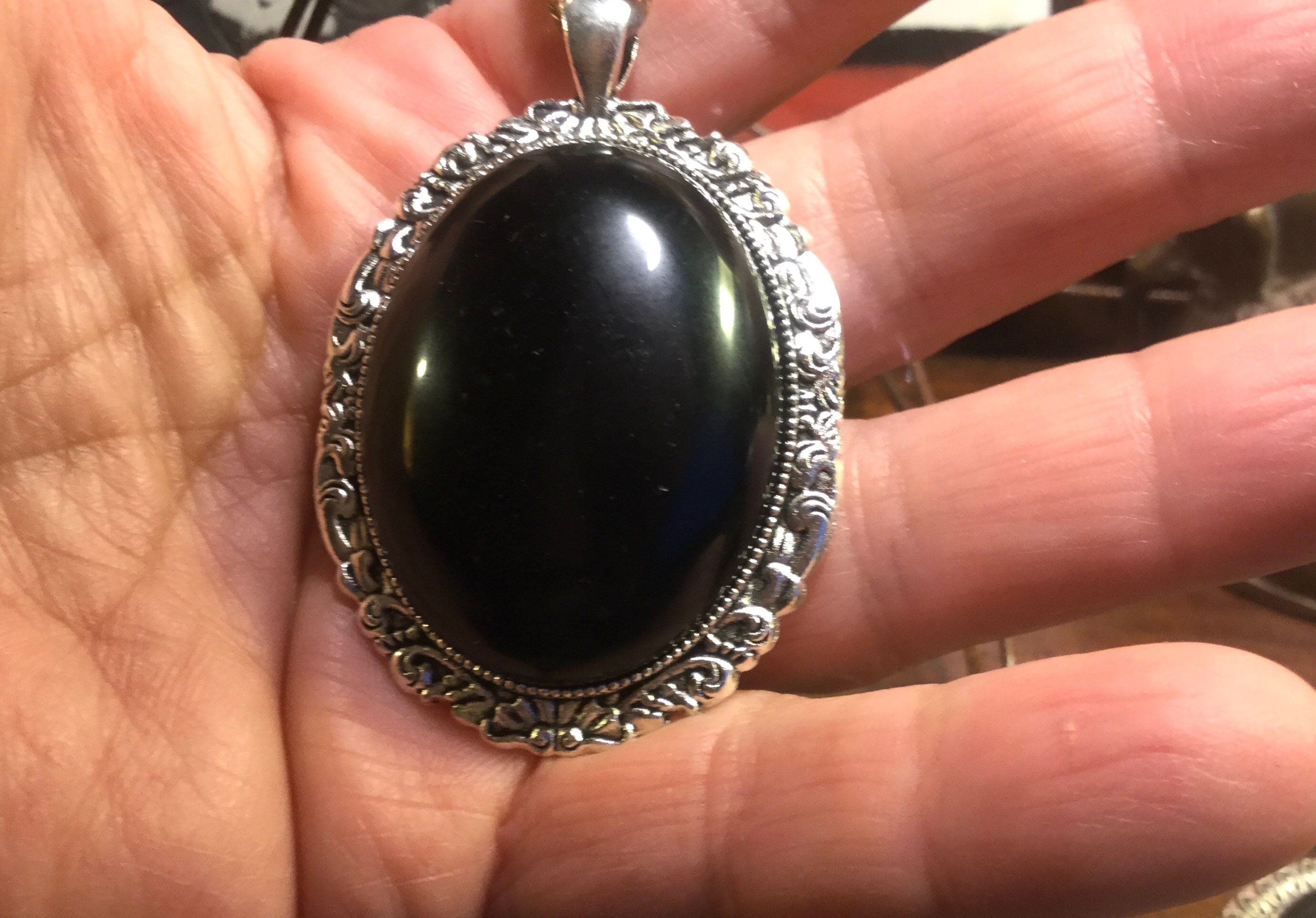 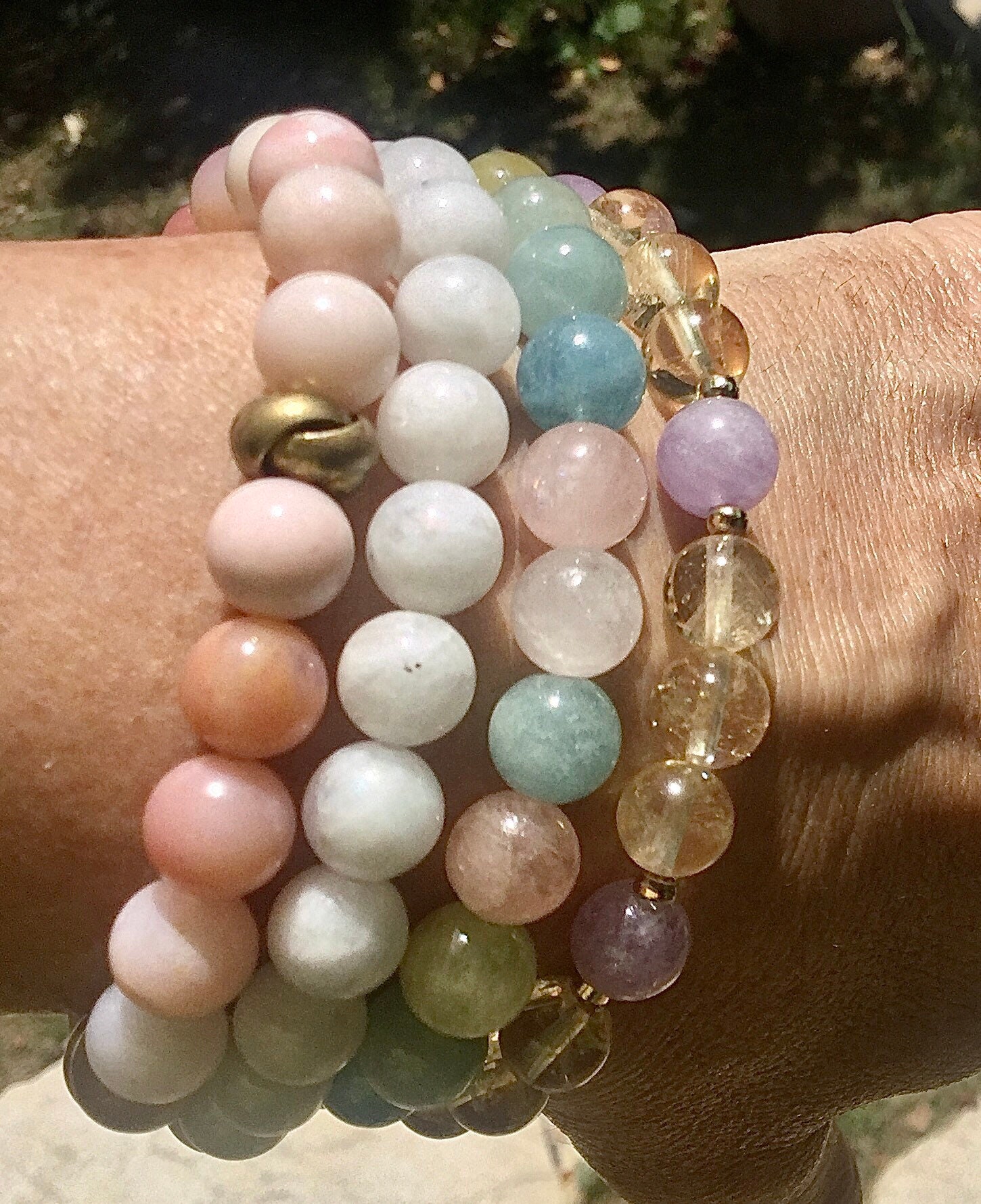 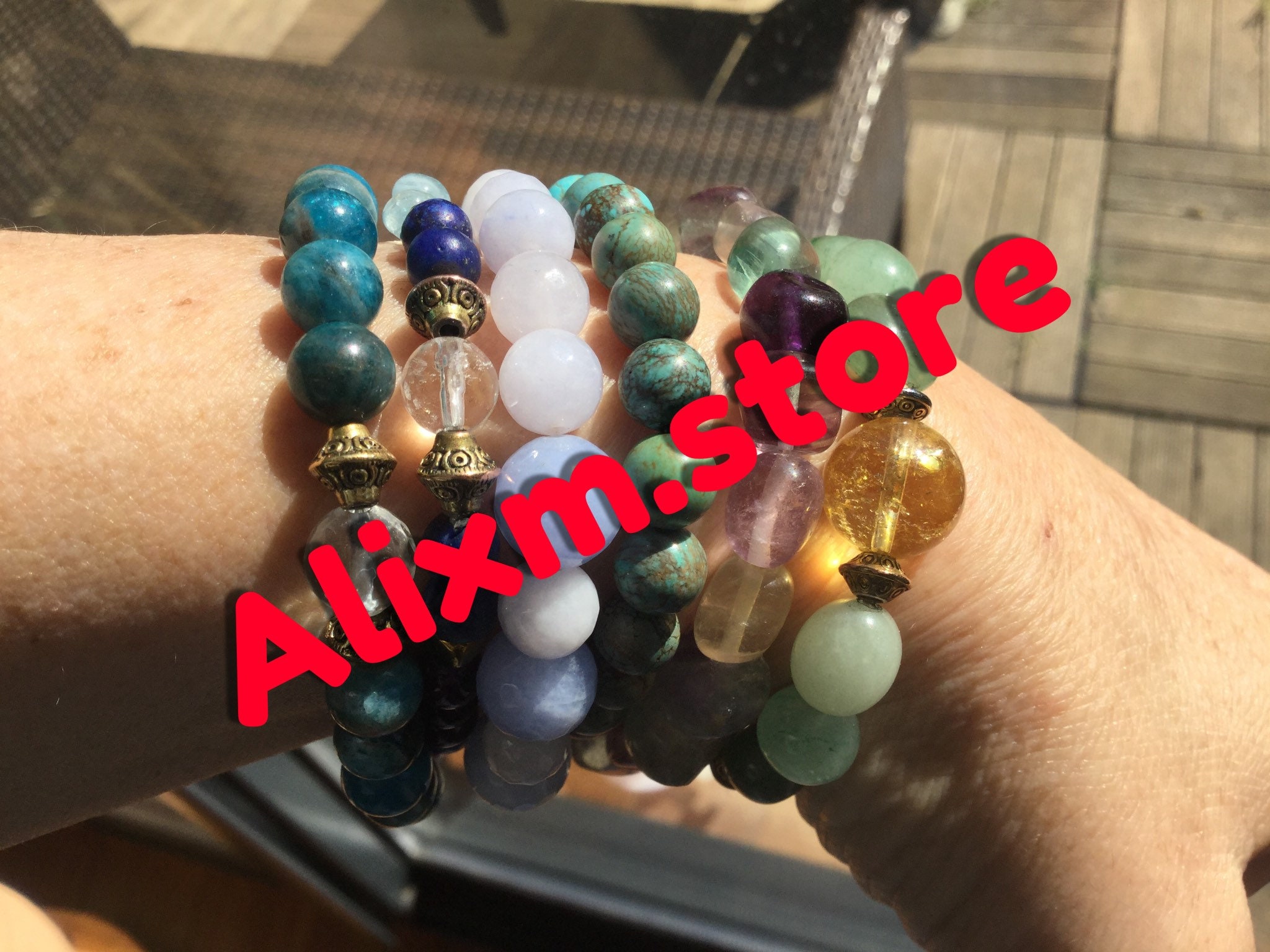 Look in your shopping cart to check your choice.

The 90 cm cord allows you to adjust the pendant to the desired length.

The support is made of zinc alloy, nickel-free.

Delivery in tracked envelope. Preparation and sending of the order in 1 working day.

My creations in natural gemstone jewelry are a way for me to transmit my passion for these beautiful minerals with amazing virtues!

My advice to purify and recharge the stones. On full moon evenings, put them in cold water for at least 20 minutes and then wipe and expose them on a windowsill throughout the night.

Agate is a stone calming anxieties, it soothes and harmonizes yin and yang.
It helps each being to gain self-confidence and accept himself as he is.
It brings courage in difficult times and brings courage to the wearer.
In lithotherapy, agate offers virtues of self-psychoanalyssis and extra-sensory perceptions of hidden elements. It is not uncommon to see people wearing a pendant or an agate bracelet, all the virtues can then be exercised throughout the day.

Agate also makes it possible to bring more sincerity and encourages to say the substance of thought.
This natural stone develops concentration and promotes memories. It is also a stone promoting clairvoyance, the recording of different lived experiences and contemplation.
Always in this perspective of calm and fullness, the agate stone allows to remove the inner anger. Its role is to dispel all internally disturbing elements and emotional shocks to establish a sense of security.
Just like on the psychological level, agate in lithotherapy makes it possible to soothe and in particular the places, by harmonizing the overall energy. The simple fact of positioning an agate in your home or workplace will bring you its two main virtues: calm and luck. If you position your agate in someone who is sick, the agate stone will restore morale and courage.

Obsidian is a stone of volcanic origin.

The main deposits are located in Armenia, the United States, Japan, Iceland, Mexico and Peru.

For my part, I had the joy of finding them on the beaches of Lipari in the Aeolian Islands.

In Lithotherapy, Obsidian is a stone that must be used with caution due to its rather powerful properties.

Obsidian is a stone of protection of a very important force and which acts very quickly.

Ideal for fragile people, it protects them against negative energies.
Obsidian stone on the psychological level in lithotherapy brings a very consequent energy which allows for the wearer to find inner peace and calm of the soul.
Obsidian frees the mental plane to discard all notions of confusion and leave full openness to the intellectual, to serenity.
It is also well known for its openness to the celestial world. Many psychics use an obsidian ball to facilitate communication with the parallel world.

Obsidian also alleviates many pains, such as cramps or other joint pain.
If you place an obsidian near your bed, it would also have the virtues of removing all mental tensions.

It must be discharged regularly because it absorbs the negative, so remember to wash it with clear or salt water regularly.

The astrological signs often associated with Obsidian are Scorpio, Sagittarius and Capricorn!

It takes its name from the province of Labrador in Canada where it was discovered.

It is part of the Feldspars.

Worn in jewelry in contact with the skin, labradorite stone develops the attraction of the being towards others. This stone is therefore very recommended for people in need of solitude.

The action of labradorite is recognized as regenerative at the physical and mental level following periods of exhaustion.

If you place an object in Labradorite to balance and harmonize the energy in a place like the living room or bedroom, consider cleaning it frequently so that it can recharge from the surrounding negative waves, your place will be sanitized.

Also, you will notice that labradorite stone can vary in shades, ranging from pale to less pale and vice versa.
You will notice that it is also possible to see it crack and then return to its natural state. It simply means that it has fully offered you its virtues and that unfortunately the time has come to separate you from it because it will no longer have the same effectiveness.

Labradorite is applied in lithotherapy to the heart or the solar plexus to reduce pain.

The astrological signs often associated with Labradorite are Cancer and Pisces.

It is part of the Quartz family.

Its main deposits are located in Australia, Brazil, Madagascar, Russia and Uruguay.

In Lithotherapy, Amethyst is considered the stone of humility and the stone of wisdom.
It stimulates creativity, imagination and clarity.
It is also responsible for soothing anger, fear, anxiety, anguish, sadness and sorrow.

It includes separation and helps in case of loss of a loved one.

It purifies places and objects.

It also purifies and recharges other minerals.

It provides calm and relaxation.

Amethyst relaxes the muscles especially in the neck and shoulder area it is a good muscle relaxant of the upper body.
In lithotherapy it is used to fight against gastric acidity, to eliminate faster the various harmful elements of the body such as alcohol, drugs, toxins.
It reduces headaches, promotes healing.

Amethyst is the stone of the natives of the month of February.